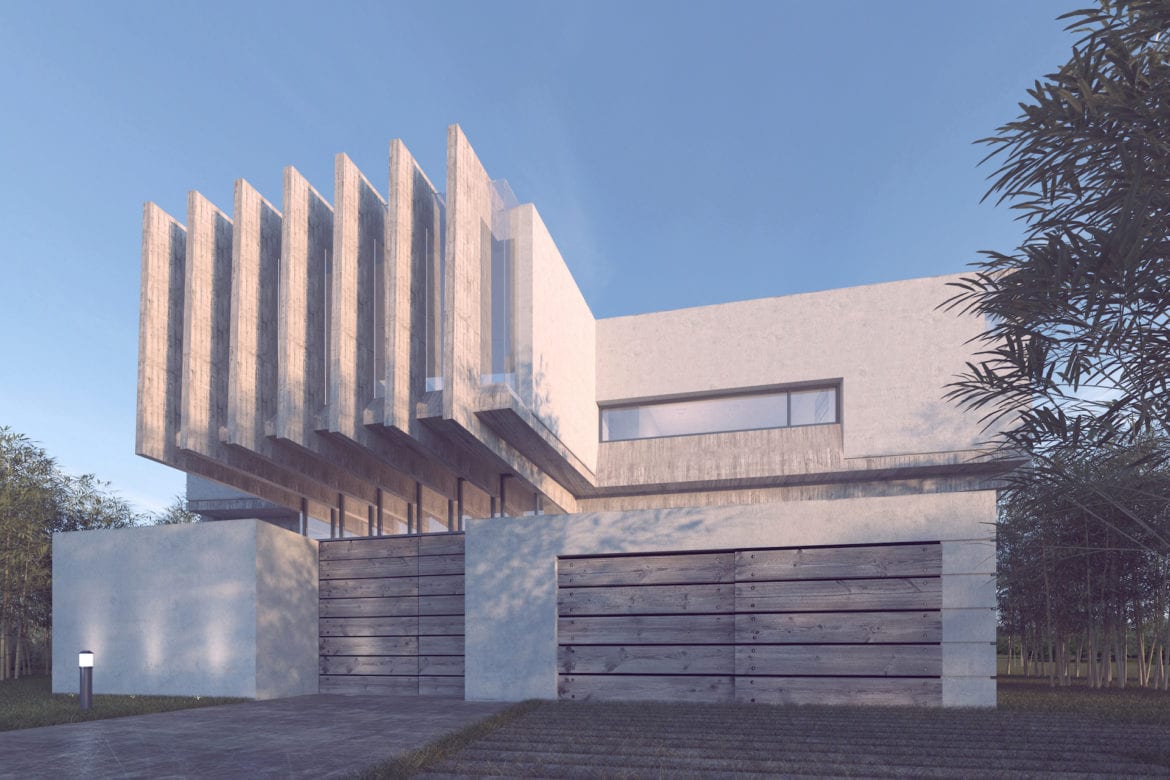 The project is located on a narrow plot with very close houses on both sides. The access road runs along the south side of the plot, with little traffic, and the more private and spacious area of the garden is place on the north side, extending into the golf course and a nearby lake. The most unusual requirement of the project was to have a 4-meter-high ground floor, in a not excessively large dwelling. This posed the need to introduce some kind of texture into the ceiling, which would somehow humanize that space. On the other hand, the excessive height of the ground floor meant that, in the first proposals, the external volume was perceived as too imposing, somewhat out of scale with regard to the neighboring buildings. The solution to these two problems came from the dissociation between the ceiling of the ground level and the floor of the first level, as if they were independent elements. Seen from the street, the house has a series of low bodies that house ancillary spaces (garage, wardrobe, toilets, etc.). These volumes have a conventional height, and give a homely outlook to the project. In addition, these secondary spaces surround the main ones, which have the height requested by the client, and whose cover takes the shape of a central void (the main lobby of the house) from which ribbed slabs emerge in the four directions, flying over the entire ground level, including the secondary spaces. In this way, the rooms on the first floor, standing on top of this flying slab, follow a cruciform configuration that seems to levitate on the ground floor, and somehow reminds of the lightness of waterlilies floating on a pond. To reinforce this image, part of the first floor is transformed into a shallow plane of water constituting the closest view of the north-facing bedrooms.

The project could therefore be described as a central vertical void from which flying extensions emerge in the four directions, supported by a system of variable-depth reinforced concrete beams. This composition is completed by a series of secondary spaces of a conventional height that envelop the main spaces on the south side. The dialogue between these two types of spaces is reinforced by the fact that both will be made of different types of concrete. Finally, a system of steel profiles arranged on the four elevations will act both as an aid to the concrete structure and as a support for the façade glass.

From another point of view, despite the regularity of the site, the geometry of the house shows a certain complexity. On the one hand, a slightly rotated pavement strip leads the user from the entrance, through the house, to the swimming pool in the back garden. And on the other, the partition between the living room and the kitchen-dining room is rotated in the opposite direction, transforming the main living space into a funnel that opens up to the back garden, the golf course and the lake further back.