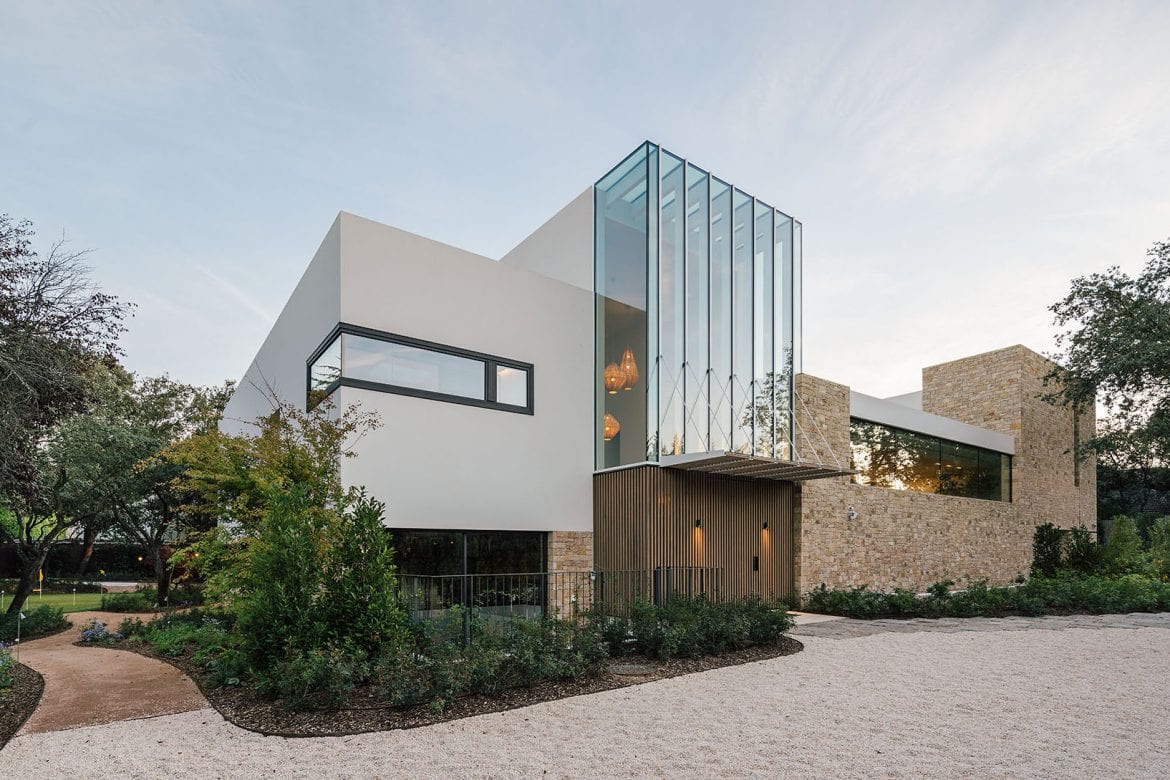 The house is located in an old and prestigious development of the metropolitan area of Madrid. It was originally a privately owned piece of Mediterranean forest that, despite the demographic pressure in the area, has preserved a high environmental quality, due among other things to the careful preservation of the existing holm oaks. The plot where the intervention was developed has several of them, scattered in a soft topography whose most peculiar feature is a slight depression in the eastern half. Next to this depression the largest holm oak of the entire plot stands, and the project was born from the desire to create an indoor-outdoor space around this tree. In this way the house is organized as an L-shape plan whose wings embrace a space in the lowest part of the plot under the shade of this magnificent tree.

The eastern wing of the L, oriented from north to south, houses the private spaces of the owners on the second floor and its first floor merges with the exterior space next to the large holm oak. The western side, oriented from east to west, has ancillary spaces in the basement, common spaces on the first floor and children’s bedrooms on the second floor. Both wings are vertically displaced by half a level, allowing the gentle accommodation of the house to the existing topography. The connection between these half levels is solved by a generously glazed access block, which serves as the main lobby, a hinge between the two wings of the L and, as mentioned before, the connecting element for the different levels.

The house strives to display somehow a Mediterranean image, through the combination of white stucco and a type of snecked rubble very popular in the Spanish Mediterranean area. At the same time, by means of the volumetric fragmentation and the play of levels, it does not try to have an objective or imposing character, but to settle down smoothly in its surroundings, looking for the closeness of the trees and blurring its presence due to the play of light and shadow caused by this very proximity. As for the interior space, the same continuity with the environment is sought and particularly expressed in two areas: on the one hand, in the aforementioned multipurpose room of the eastern wing, that intends to merge with the outer space next to the great oak, especially in periods of good weather; and on the other hand, in the dining and sitting room of the western wing, enclosed in its southern side by four large sliding windows that cover a span of 10 meters and may be hidden into the walls. Once they disappear, the complete fusion of that space with the porch and garden on the south side of the plot is achieved.

The only moment when the design becomes more assertive is in the access volume. The owner wanted a space that, based on memories of his childhood summers, he called “a sea of glass”; a space where, upon entering, he could leave behind the burdens and concerns of everyday life and have the feeling of having arrived home. That space, which at its highest point reaches almost 10 meters, negotiates with the topography and the vertical displacements of the different parts of the house, and at the same time has a strong theatrical character: from the entrance a balcony allows the view of the lower area, with the great holm oak at the back; on the right it gives access to the main hall, and also gets visually connected to it by means of a horizontal gap; on the left it shows the way up to his private space and, finally, a bridge connects this point with the children’s area. We hope that the scale, the view of the garden at the back, the sunlight flooding the space at noon, and the complexity of connecting elements will be able to foster that feeling of “sea of glass” that the owner longed for and gave birth to his house.