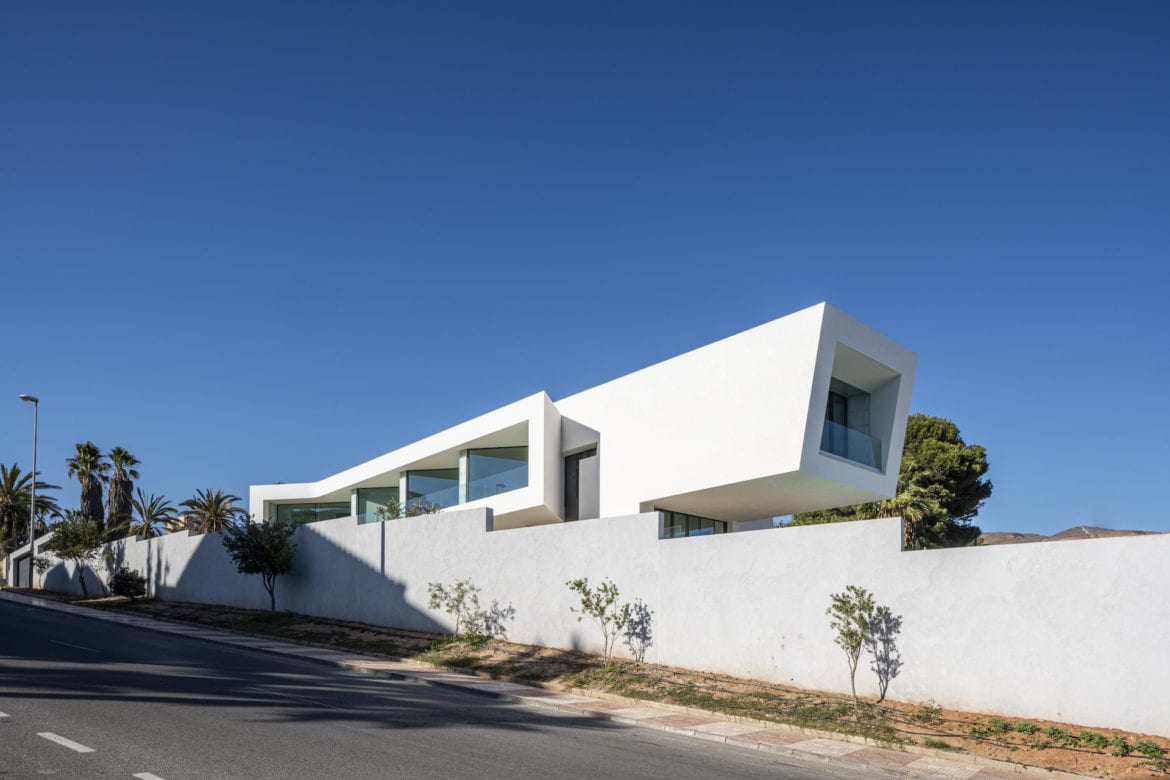 The site was a plot with great potential due to its location in the seafront and its prominence, but burdened with challenges of topographical, geometric and urban nature. Topographically, the sloped terrain was, as usual, an issue regarding accessibility and bulkiness of the construction. Geometrically the plot is very elongated and narrow, and added to that there was an urban planning regulation that linked the selected recess with the maximum height allowed for the house, which forced even more the linear character of the building. The proportion and location of the dwelling within the plot followed from these premises, giving the minimum possible width to front directly facing the coast, but at the same time taking advantage of the fact that the side façade towards Naranjo Street, even without having such a straight orientation towards the sea, does allow a clear view of it. A game of double directions emerges from this strategy, being particularly evident on the first floor: the circulation area and the master bedroom follow the orientation determined by the shape of the plot, and look directly towards the beach. The master bedroom is shaped as an enormous cantilever that constitutes the most dramatic feature of the composition. The rest of the spaces on this floor seek a biased orientation with respect to the previous one, which turns out to be the strict South, ideal from a climatic point of view. And in this way they manifest themselves as the gills (cantilevered as well) of a sort of shark rushing to return to the sea.

The overhanging volumes of both the main and secondary bedrooms create the much-needed shade over the ground floor, so that the living room and kitchen, with their corresponding outer extensions, are essentially the spaces resulting from raising the bedrooms from the ground.

This play of double directions finds its conclusion in the façade where the main access is located, turning its back to the sea. Here there is a split of volumes containing, on the one hand, the bedroom for the grandchildren of the family (which maintains the dominant direction of the plot) and, on the other hand, the studio of the owner which, while keeping its glazed side in a perfect south orientation, seems to point towards the access to the plot. It runs parallel to the service area on the level below, which is somewhat sunken in the ground, and the ramp leading to the garage. The vehicular access to the plot finds its ideal location in the most distant corner from the coast, in order to prevent the car from disturbing the calm contemplation of the seascape.

The linearity of the building allowed for the easy fit of an indoor swimming pool in the basement, one of the client’s requirements. In order to provide natural light to this space, a parallel triple height was attached to it, visually linking the three levels of the building. It is conceived as an authentic indoor garden, transforming the main circulations within the house into a stroll through the park, a walk in which the undesired view of the neighboring buildings is concealed with a translucent glass checkerboard, a walk that finds it climax and conclusion with the contemplation of the sea in its full extension, or in particular with the suggested view of Cabo de Gata, due to a special window that is rotated to point the location of that singular place.

From a material and constructive point of view there is an absolute dominance of white and glass, along with the search for the greatest possible cleanliness of all details. Outside, only a few elements challenge this logic, like the window that showed us the location of Cabo de Gata, and inside, the only counterpoint is the pavement. The integrated furniture, the paneling that makes doors disappear, the recesses hiding the aluminum window frames are, among others, the strategies that seek the minimum distraction in front of the direct contemplation of the sea, as if that were all that is needed to live in that house.